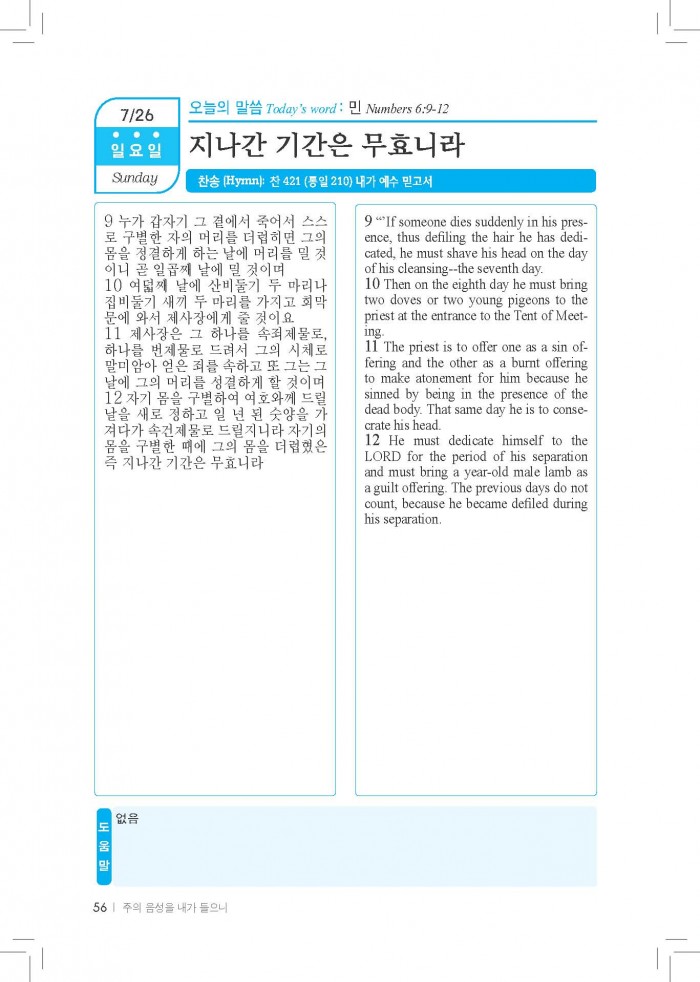 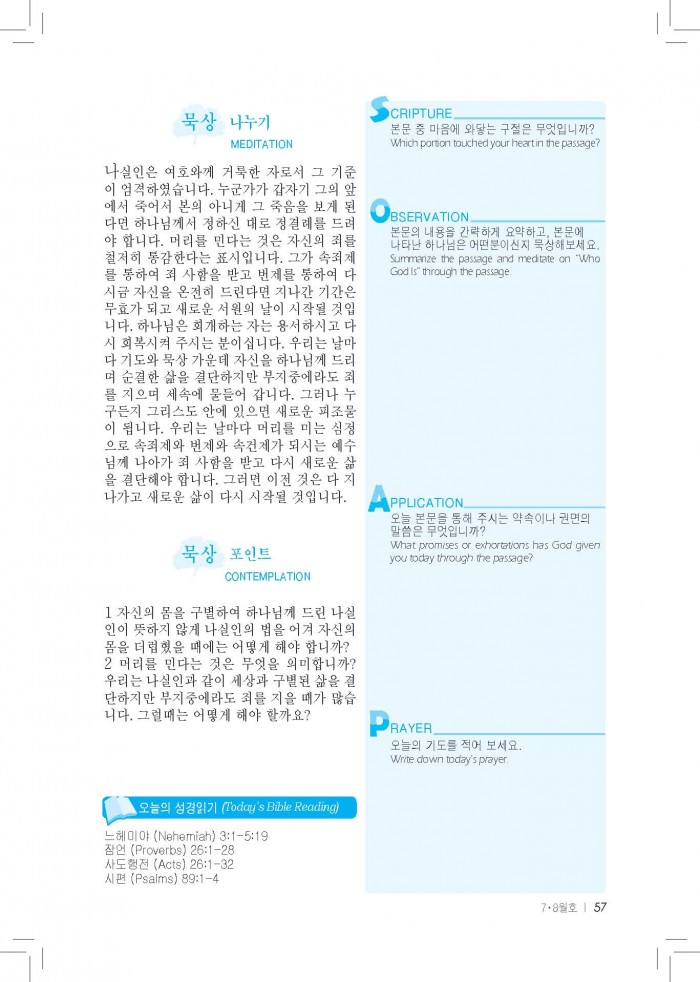 But if a man dies very suddenly beside him and he defiles his dedicated head of hair, then he shall shave his head on the day when he becomes clean; he shall shave it on the seventh day. (Num 6:9)

Summary
- The passage describes what to do when a Nazarite under vow gets polluted by coming in contact with a man who suddenly dies next to him, so that he/she can be re-consecrated.

Who is God?
- God is holy and He calls us to be holy. (In fact, through the Nazities, I believe the Scriptures reveal that He sets some people apart as truly holy onto Him: There is some real serious level of holiness, where one shouldn’t even think about “playing” with it.)

The passage describes how a Nazirite may get polluted in what could be easily shrugged off as “an unlucky, sudden attack,” where the Nazarite perhaps wants to claim that he/she is an “innocent victim.” The Nazarites simply stumbled on a dead body despite their will! But the moment they come in contact with a dead body, the vow becomes void. Further, it doesn’t stop there at their pollution, but through a rigorous process, they get re-consecrated.

What is the process for re-consecration? He/she has to wait for 7 days to become CLEAN. Then, on that seventh day, he SHAVES his head, but not being able to burn it but only throw it away, thus nullifying all the “consecration” that had been offered so far.  Then, on the eighty day, he gets RE-CONSECRATED, however, only by offering “cheap/affordable” sin and burnt offerings (2 birds in total) as well as offering relatively “expensive” guilt offering (a male lamb a year old). (cf. Technically speaking, it is HIS HEAD that gets consecrated (qedosh) while it is HIS DAYS that are dedicated (nazir) to the LORD as a Nazirite. Read Num 6:11b-12a))

The “encouraging” aspect of all this is that the Nazirite is willing to be re-consecrated and, crucially, the LORD is willing, as well! However, the “challenging” aspects of this include that the consecration can be quite easily polluted (e.g. by stumbling upon a dead person) and that the de-consecration doesn’t come cheap as reviewed above. All in all, however, to a dedicated “heart,” an unstoppable pilgrim for His holiness and His joy, this must only reinvigorate passion for uncompromising holiness.

I must confess that I have a LONG, VERY LONG, way to go for holiness. In fact, I have tended to not take it seriously, often shrugging it off as a religious, unnecessary, self-inflicting burden, and secretly tending to give more emphasis to “grace,” while still hoping and vowing that I shall never be sold out to “cheap grace.” Even today, while I am physically alone, I have found myself under some “sudden attack (?)” a couple of times, feeling offended, either over the phone or over an email.. Not only that, I have had a cheap yet long excuse that my attention span is short that too often I would disengage myself from some serious business—whether it is meditation or prayer—and instead I would zone out. What then? I would “stumble upon” some bad stuff on the internet, etc. Again, this only shows that I have a LONG, VERY LONG, way to go for holiness, which honestly I didn’t even bother to choose to take really seriously. You may want to defend, but your habitual lifestyle and the couple of anecdotal instances only prove otherwise.

The question is, do you want to be re-consecrated? Yes, Lord! And, as you have witnessed it over and over again even at the risk of you not fully grasping the weight of His demand for holiness on your life, His mercy has always been overwhelming in your life, always appearing and working to re-consecrate me over and over again over so many mistakes, hiccups, encounters, accidents, etc.

Yes, it’s true that it is NEVER by your zeal or effort that you become who you are. But what did Paul say? “But by the grace of God I am what I am, and His grace toward me did not prove vain; BUT I LABORED EVEN MORE than all of them, yet not I, but the grace of God with me.” (1 Cor 15:10) “But I discipline my body and make it my slave, so that, after I have preached to others, I myself will not be disqualified.” (! Cor 9:27)

How should we then understand a dead body that I MUST AVOID EVEN IF IT MEANS BLEEDING? Anything outside the Presence of God since HE is the author of LIFE. In other words, anything in the domain of the No-Presence of God.. Sin, anything that God is telling you to sever and run away from. Even some bits of bad habits, laziness, tendency to take offense, which is truthfully nothing other than a clear sign of your immaturity and flesh. Waiting to be dealt with may be painful, but it’s worth it and you must go through it. Shaving your hair and seeing it go down the drain may feel frustrating, but don’t look back but look forward to re-consecrating yourself. Accepting the guilt, which is far more expensive than “just” sin and burnt offerings, could be hurting, but it only shows how serious the guilt was and hence how GOD takes your vow to holiness seriously.

Sudden attack? Old habits? Rigorous process? Stop babbling! True holiness is costly. Give all your heart to the Lord and ask the Lord in some serious prayer for His help to truly consecrate you and dedicate your days on this earth onto Him.

- Sin to avoid: Stop making cheap excuses with “sudden attacks” and “not-so-bad but not-so-good habits.”
- Promise to hold: My holiness will be pleasing to Him. Our Lord grew up in a not-so-ideal town of Nazareth to fulfill what was spoken through the prophets: “He shall be called a Nazarene.” (Mt 2:23)
- Action to take: Especially, you are always corrupt and corruptible due to the hidden pride and ego but always choose Him. Pray to God to change your lifestyle and some “small” but, when added together, “big” habits that ought to be changed even at this age. Discipline your body and make it your slave.

Lord, prepare me to be a sanctuary. Pure and holy, tried and true. With thanksgiving, I’ll be a living sanctuary for You. Lead Me on Lord from temptation. Purify me from within. Fill my heart with Your Holy Spirit. Take away all my sin.

Lord, help me to be as holy as You want me to be and as You are holy. O Lord. IN Jesus Christ’s Name. I pray. Amen